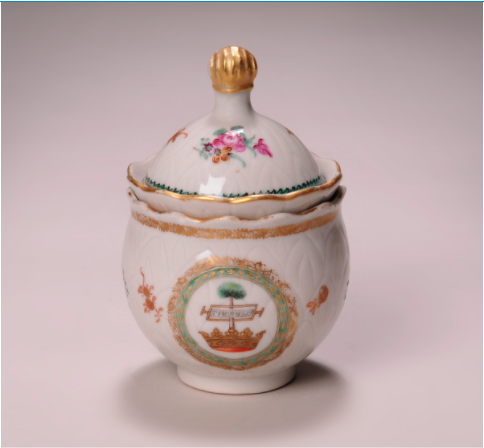 Chinese porcelains were introduced to Europe as early as the 14th century, and commercial trade between Europe and East Asia grew in the 16th century. This porcelain custard cup, created by an unidentified Chinese artist in 1780, represents the Chinese production of utilitarian porcelain objects specifically for Western consumption. Manufacturing an object that serves custard, a Western custom, marks China’s place in international trade as a producer of exports and reveals its interpretation of Western consumer desires. In this sense, the cup is an interpretation of the West through the eyes of the East for the purpose of financial gain.

This layering of interpretations and perspectives makes the custard cup in itself an amalgamation of cultures. Its floral design and delicate details are undeniably Western influences imposed upon porcelain, an Eastern tradition. The transculturation present in this single custard cup is reflected by the larger transculturation happening at the time. Increased trade and mobility meant that nothing was spared from being shared – ideas, traditions, foods, and spices were making their way across oceans, both literally and figuratively.

China’s trade efforts were not futile. Demand for Chinese porcelain goods rose during the 17th and 18th centuries, as possession of Chinese mugs, cups, and household objects exuded an air of luxury and worldliness. European porcelain factories appeared in the late 18th century, leading to a decline in demand for Chinese products, so this cup is from a period when objects of its kind were on the demise.
By Tori Placentra and Kennedy Thompson