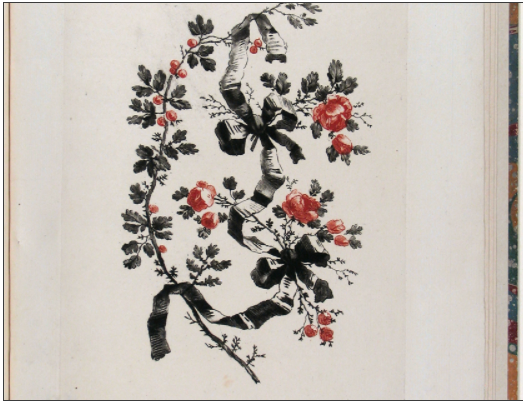 The beauty of flowers has been an essential part of human civilization. We use flowers across cultures in many different ways. Aesthetic beauty, ingredients in food, symbols of love, virginity, even death. The importance we attribute to the flower’s beauty have led to mankind’s search for new colors and varieties.

In the Suite of Six Knots of Ribbon Adorned with Flowers print, the common English rose is a hybrid between Chinese and Persian varieties. Its allure is the result of people’s attraction to the new and exotic. However, Europeans’ widespread implementation, or implantation, of this flower into gardens and subsequent aesthetic uses indicates acculturation and acceptance of the exotic into the dominant culture. The interchange of ideas and goods between cultures are not always associated with harmony and consent. The Chinese tea plant, for example, was secretly stolen by a British spy and taken back to Britain for cultivation. China was certainly unwilling to allow the British to have their own means of producing such a valuable export good. Perhaps the hybrid rose we see in the catalogue above comes from a similarly illegitimate background, the story behind this delicate flower is as mysterious as the artwork itself.

Little is known about this piece of artwork. The writings in the book suggest that it is some sort of advertisement, but for what purpose? Is this intricate network of knotted ribbon and rose an art piece for a wealthy estate? Or is it the centerpiece of a lavish party? The significance of the six roses are unknown and the use of the book is equally unclear. The book itself could be for sale as well as the content inside of it. On the first page, we have a six-knotted ribbon entwined with roses. We can assume the ribbons are colorless to accentuate to the red flowers entangled in them, delicate additions which emerge amongst the foreground of otherwise monochromatic etchings. The printed rendition of the ornate decoration implies dimension through its hatching and shading, yet exudes grace instead of gaudiness because of the fine line details.

The rest of the book also contains bicolored prints advertising more items for sale, which confirms the idea of its being a catalogue. These prints give an insight into the trends of adornment and decoration in eighteenth-century France. The adoption of the common English rose into French haute fashion indicates the transculturation that occurs through trade, further complicated by the Eastern origins of the hybridized plant. The dainty appearance of roses and ribbons veils the complex and sometimes shady history of transculturation.