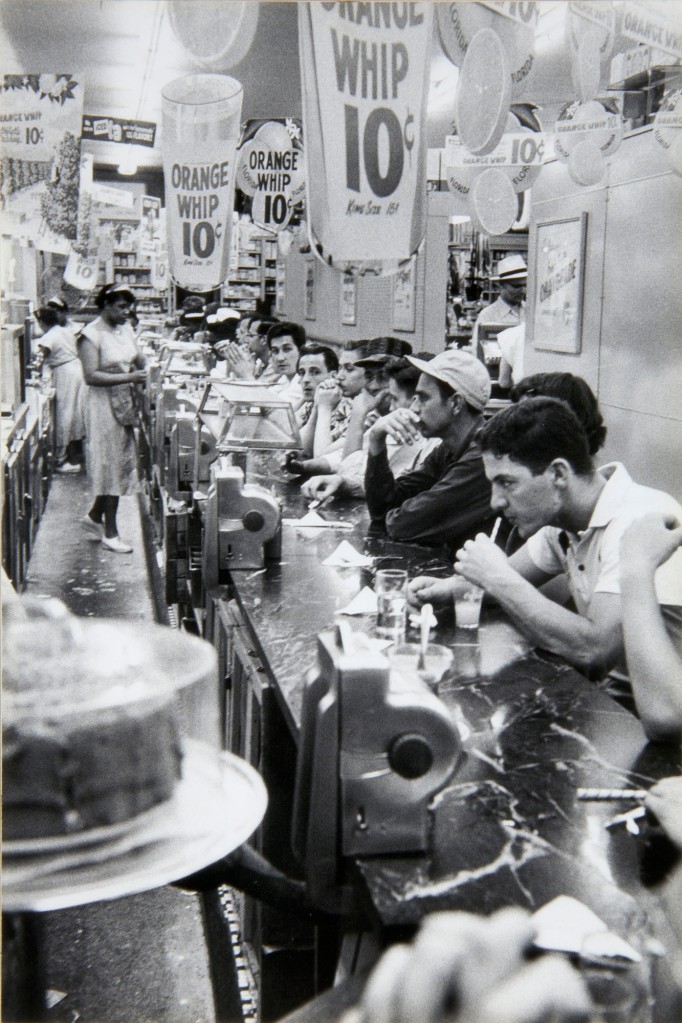 Drug Store: A Photographical Analysis of the Relationship between Food and Community in Post-War America

Entitled Drug Store, Robert Frank’s post-war photograph of urban America engages directly with the relationship between food-culture and identity. The print is part of a series of 83 photos captured by Frank, a Swiss, Jewish immigrant, entitled The Americans, which he selected from around twenty-seven thousand snapshots (Lane). The utterly quotidian subject matter of this image is typical of the series, in which Frank focused on oft-overlooked elements of daily American life (National Gallery of Art). In the blurred foreground rests a cake, hidden in its Bakelite container, perhaps the only sense of luxury captured. The ceiling is a sea of advertisements; ten-cent Orange Whip, served in Coca-Cola glasses (the epitome of American consumer culture), seems to be the drink of choice. The walls are sparsely adorned with framed prints, and the only visible floor space is littered with the droppings of a busy soda fountain–light smudges mark dark, pebbled tile. The most striking physical feature is the long, marbled lunch counter, studded with paper napkin dispensers placed every 3 to 4 stools apart. This counter, Frank’s clear artistic focus, divides the scene into two groups based on occupation, race, and gender: those eating at the counter are men of southern-European descent, and those serving from behind it are women of African-American heritage. Despite respective homogeneity in each group, only the group of waitresses resembles a community; each man is simply an individual patron. Food consumption, therefore, separates Americans, but food preparation unites them. The question is: why?

Let us first investigate the women’s ostensible unity. Their identical uniforms certainly contribute to the appearance of community: pale dresses, cinched at the waist; clean, white tennis shoes; pulled-back, black hair; accessory headbands. In addition, the most convincing visual evidence that the women constitute a community is found in the back left corner of the restaurant, where two of them toil in close proximity. Preparing food together, the scene-within-a-scene evokes images of Tita and Natcha cracking eggs into a cauldron of cake batter from the film, Like Water for Chocolate. The film illuminates the death-defying bonds that are created between women who cook together; not only does Natcha become like a second mother to Tita (and much more loving than her biological one), but Tita’s recipe catalog allows for her grand-niece to connect with the family’s roots through cuisine. The movie therefore posits that the bonds of cuisine can be even more powerful than those of blood. That cooking unites people certainly holds true for Frank’s piece; the act of preparing food together, even in a commercial setting, creates a strong sense of community amongst the African-American females.

Regarding the men, the image depicts the consumption of multiple individual meals, instead of a communal one; at the heart of the matter is the lack of a common, community-building eating space. At the stools—little islands of isolated indulgence—sit the men, physically similar: dark hair, dark eyes, tan skin, black eyebrows. However, despite similar appearances, the men are an atomized crowd, rather than a united clan. Conversation is at a minimum, and anxious, horizontal glances render these men as strangers. To borrow an image from Anthony Lane’s article, Road Show, “half of them look straight ahead, like drivers in dense traffic” (Lane). The lack of shared food also contributes to the standoffish atmosphere: no man is visibly eating, and the wall-facing design of the counter encourages individualism, whereas a table might encourage the natural formation of groups based on proximity. A brief comparison with French literature corroborates this conclusion: Zola’s wedding feast in L’Assomoir features a description of Claude and Etienne “running back and forth under the table scattering the chairs this way and that,” and in Madame Bovary, Flaubert’s feast of bourgeois eroticism features a depiction of Emma’s preoccupation with the lavish “bouquets on the table” (Zola, 81; Flaubert, 42). The soda fountain is therefore drastically different than the café of European glory: where the latter promotes community through its “binding hubbub,” the former serves solely to nourish the busy individual in-between shifts (Lane). The feast, a celebration of community, depends on the table for a shared dining experience, and is thus impossible within the confines of Frank’s drug store lunch counter.

Drug Store portrays the vast distinction between food preparation and food consumption in contemporary America. The act of making a meal is still sacred: it brings individuals together to form a community; however, Frank’s photograph shows in parallel that merely eating a meal in close proximity to others is not enough to create bonds of community. A certain procedure, etiquette, and form must be followed in order for a meal to transcend to feast-hood, but that procedure, etiquette, and form is built into the preparation of a meal. Cooking requires that a specific space be set apart from the ordinary, a secular temple of cuisine: the kitchen, but the act of eating can take place anywhere. The relationship between cooking and consuming, thus, falls in line with Mircea Eliade’s model of the cosmos. In man’s “desacrilization” of the universe, eating no longer requires a pre-determined space, so it becomes “profane,” unable to unite man and form community (Eliade 23). Cooking, however, still requires a specific space, a “sacred space,” outfitted with specific equipment: aprons and ovens, which compare to the vestments of Catholicism, and the Aron Kodesh of Judaism (Eliade 23). Cooking therefore requires that interaction with food ascend to ritual, for how else would man rationalize the seemingly magical transformation of humble ingredients to satisfying meal? Drug Store illustrates exactly what can happen when modernization takes a figurative hatchet to the feast-table, and thus the place and ceremony of eating. Concomitantly, it affirms the community-building power of the eternal rite of food preparation. Frank urges Americans to remember the sanctity of food, and the sanctity of space, in order to maintain their communities: to eat together at the table, to cook together on the counter, to live together as l’homme social.