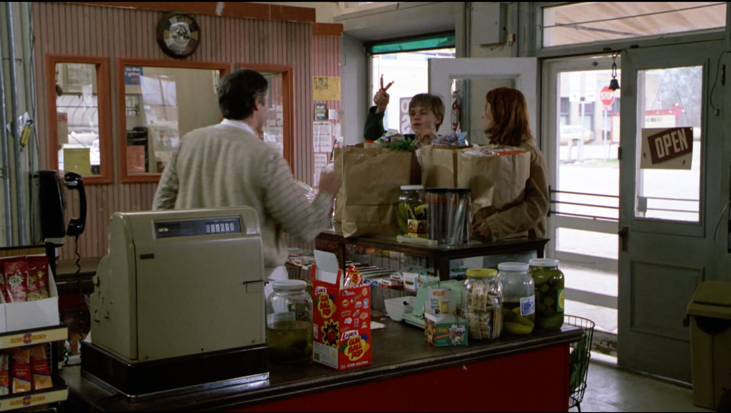 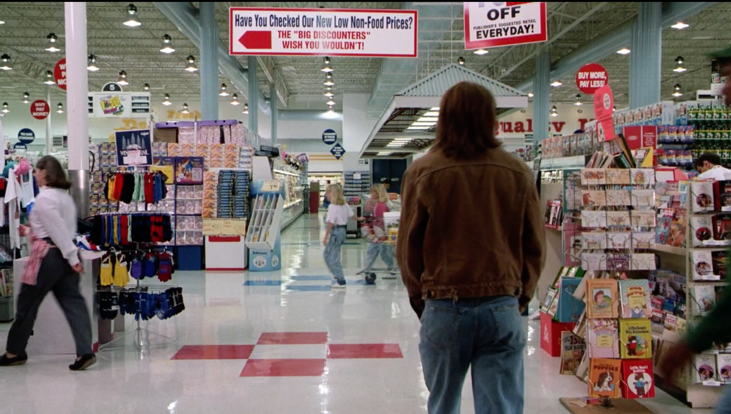 The dull colors of Lamson’s Grocery (Figure 1), where Gilbert works, are contrasted by the saturated colorful interior of Foodland (Figure 2), the large chain grocery.

What’s Eating Gilbert Grape (1993) follows the story of Gilbert Grape, a young man feeling trapped in the small town of Endora, Iowa, by his role as the sole male provider for his family, which includes his homebound mother and his mentally handicapped younger brother, Arnie. Adding to Gilbert’s struggle with responsibility and a desire for freedom are the changes coming to the town, seen through the encroachment of new standardized food sources such as the Burger Barn and Foodland. These corporate vessels represent the shift of society from local providers to consumer-driven industry. Gilbert’s inability to keep up with his family’s needs and his yearning to escape Endora represent the death of the small town through a personal narrative. The small town is no longer enough to feed the people who are hungry for the shiny and grand modern life, as shown through the characters’ attitudes towards food.

Gilbert’s role as feeder is evident from the title itself- his last name, Grape, is a fruit, and the phrase “eating” refers to the ingestion of food as well as its meaning in context of a nagging worry or issue. As the title describes the conflict within Gilbert, it also suggests a force literally consuming him. The name Grape itself also suggests Gilbert’s relationship to his family– grapes grow in bunches, and the Grapes are tightly bound together, mainly by their mother, Bonnie Grape. She is nearly immobile due to her large figure, caused by overeating due to grief after the passing of the Grape’s father. This has made her unable to fulfill her role as a mother and instead her children provide for her, as nearly every scene including her features her children either preparing food for her or eating a meal together.

Gilbert’s struggle with his mother’s debilitating weight and the need to provide for his family is shown through his rejection of food. The filming of the first dinner scene emphasizes how Gilbert’s situation has made food repulsive to him. The sounds Arnie makes as he slurps up the spaghetti they are eating are magnified so that each noodle seems wormlike. Each of Gilbert’s siblings is shown to be eating while talking, and his older sister heaps an additional helping upon Ernie once he has finished, but Gilbert never eats. Shortly after, Gilbert grows frustrated and leaves the table, taking his plate with him and dumping its contents on the ground. While he shows dissatisfaction with the food at home, Gilbert often also visits a local diner with his friends. When he assumes the consumer and not the provider role, he appears to have no qualms with food.

Gilbert’s consumption and provision of food are not only intra-familial but a key part of his other interactions as well. Gilbert works within a local grocery store, Lamson’s, which faces declining sales due to the Foodland where, according to Gilbert, “everyone else shops.” The contrast between the cracked white façade of Lamson’s and the warm yellow exterior of the Foodland is emphasized in a crosscut early in the film, paired with a montage of the few run-down businesses within Endora. Their faded exteriors are dark inside, and the dusty streets are devoid of people. As Gilbert describes, describing Endora is like “dancing to old music”- it is clear the heyday of the town has long since passed. This impression is reinforced by the muted browns and reds of Lamson’s interior and the camera’s focus on the canned goods, suggestive of the age of the store. Many scenes filmed within the store are also backlit by the windows, creating a dingy atmosphere and highlighting the appeal of the outside against the dusty store.

By delivering groceries, Gilbert provides food for another character, Mrs. Carver, an older woman who he is having an affair with. Gilbert functions as both consumer and provider in this role, as he is an outlet for a frustrated housewife but also relieves his own loneliness through these interactions.

Mr. Carver’s character is a tragic parallel of Gilbert’s. He works as a lawyer and uses the money he makes to buy the products his kids demand. However, the Carver kids are never satisfied, demanding a pool when they have received a trampoline, and insisting on the big size of ice cream at the drive-thru. This aggressive consumerism reflects the shifting demands of the small-town people to big products and innovation and the seemingly impossible pressure the family provider faces.  When Mr. Carver finally yells, “I can’t give anymore, I’ve given enough already!” it sounds like an echo of Gilbert’s own frustrations over his selflessness for his family.

Ultimately, the out-of-town chain stores have triumph over the local, with consumerism winning over traditionalism. A new Burger Barn has arrived into town, as Arnie points out in the middle of Mr. Carver’s funeral. Arnie, after attending the grand opening of the Burger Barn, proceeds to wear a Burger Barn cap for the rest of the film, even during the death scene of his mother. The impersonal nature of these widespread chains is shown through their appearance even in the grimmest scenes.

Even Gilbert eventually caves to the new forces when he goes to shop at Foodland. He is assigned the task of purchasing a new cake after the one baked by his sister is knocked to the floor by Arnie. The contrast between Lamson’s and Foodland is clear from the first shot of the store. Its fluorescent lighting and bright color palette show its modernity. Gilbert passes by stacks of fresh produce in a rainbow assortment before gazing at the lobster tank in bewilderment. The pre-made cakes themselves also serve as a stark contrast between Endora and the outside- unlike the homemade cake with its plain vanilla frosting, the storebought cakes sit covered in spiky blue and yellow frosted tips, with a variety of unconventional shapes and sizes.

In the end of the film, Gilbert and Arnie chose to leave Endora with Becky, who travels in her own mass-produced item, a chrome trailer. Although Gilbert struggled with being consumed by responsibility, he escapes by consuming in like fashion with outside products. The demise of Endora thus seems inevitable, as even those most caught in its hold leave to seek larger pastures.