Food as Memory and Migration

In 1988, Universal Pictures released the animated classic and acclaimed children’s movie The Land Before Time. The film tells the story of the orphaned brontosaurus Littlefoot and the other young dinosaurs he befriends as they join together after a devastating earthquake to journey to the Great Valley to reunite with their families. It’s become a children’s classic since its release, spurring the release of thirteen sequels over the course of twenty-eight years. One of the most prominent themes and motifs in The Land Before Time is the role that food plays, for the dinosaurs as a collective group and for Littlefoot especially, as an association with memory.

For the dinosaurs as a whole, food and food habits are both a means of identifying themselves, and a necessity that forces them into migration. The film begins by dividing the dinosaurs into two main categories—the leaf-eaters who graze on plants, and the meat-eaters who feed on other dinosaurs (consequently called “sharp teeth”). The diction alone, referring to meat eaters by their teeth, a weapon of sorts which they use to bite and to eat, insinuates a danger about the animals that comes from their diet. This sense of danger isn’t unmerited; the idea that the dinosaurs were either the prey or the predator was certainly realistic, and contributes to the idea that animals in the wild must either “eat or be eaten.”

The second importance of food to the dinosaur population, as previously touched on, is its more obvious role as a necessity for survival. Following a drought, the food source that the dinosaurs depend on begins to dwindle before finally disappearing entirely, causing the dinosaurs to migrate to the legendary Great Valley, making the need for a new source of food the overarching conflict in the film. In the beginning of the film, a narrator states, “Then it happened that the leaf began to die. Mighty beasts who appeared to rule the earth were ruled, in truth, by the leaf, their food” (4 min). Not only does food become a factor in decision-making, but it becomes a larger-than-life force which holds power over the minds and bodies of the characters. The implication becomes that our lives are ruled by food and our access to food. From a survival standpoint, this makes sense. But more interesting to note is that from a storytelling standpoint, the film takes advantage of our basic need for nourishment as a living species, utilizing that need to build conflict and a motivation for migration and a journey—in a children’s movie, nonetheless, where realism in the genre is often overlooked. 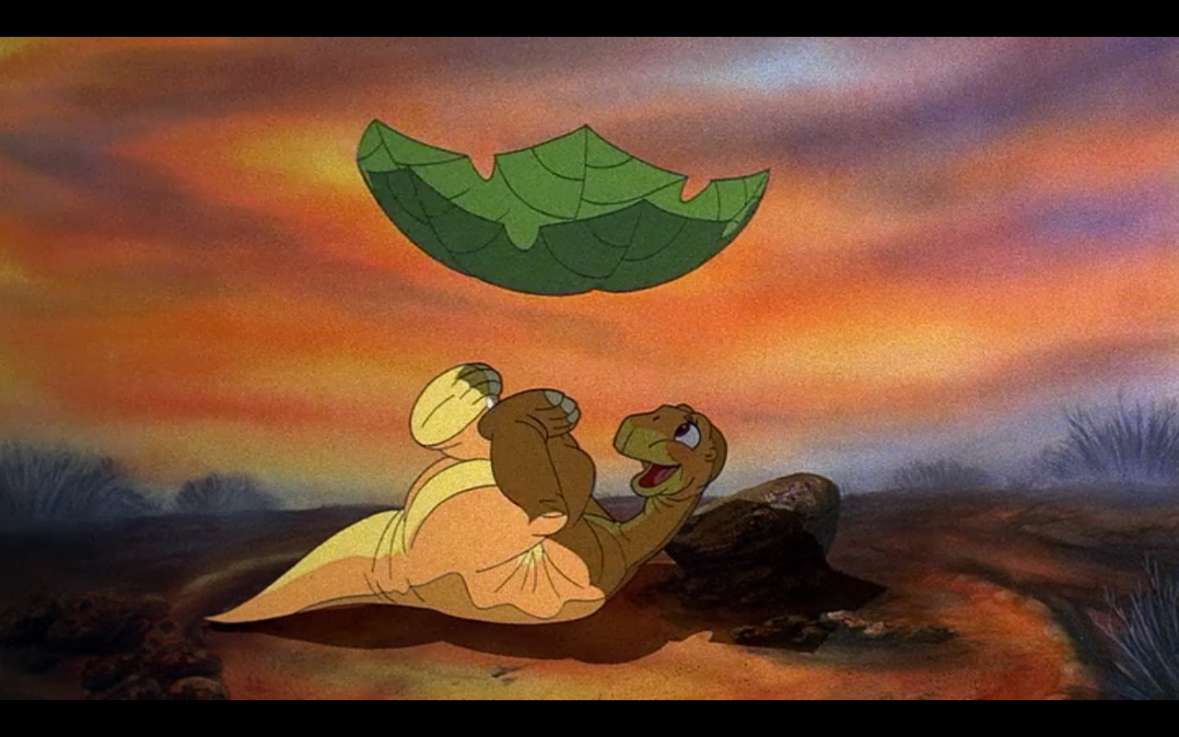 The tree star floats down to Littlefoot for the first time. (24 minutes)

These first two applications of food are more survival-based, but the film also delves into the emotional capacity of food through the character of Littlefoot. For Littlefoot, food becomes a symbol of his late mother and a means by which to remember her and her guidance. Towards the beginning of the film, after the dinosaurs have begun their migration to the Great Valley, Littlefoot’s mother finds a “tree star,” a star-shaped leaf which has become rare in their dry and barren land. She picks it from the tree and gives it to Littlefoot as a promise of what he will find in the Great Valley. The tree star becomes a symbol of hope, faith and perseverance for Littlefoot, and a representation of his mother’s memory after she dies.

The film intentionally connects the tree star to the memory of Littlefoot’s mother by having it float down to him after his mother’s death, symbolizing his mother’s presence with him even after she is gone. The return of the tree star is accompanied by his mother’s voice calling his name, and her instructions to him on how to reach the Great Valley (24 min). The technique of this voiceover crystallizes the connection between Littlefoot’s mother and the tree star for the younger audience, making it clear that the tree star acts symbolically as a physical substitute for Littlefoot’s mother. The association between food and memory is an idea Proust considers in his essay “Remembrance of Things Past” in which he discusses the effect that the taste of a madeleine dipped in tea has on him. He says, “And as soon as I had recognized the taste of the piece of madeleine… immediately the old grey house upon the street, where [my aunt’s] room was, rose up like a stage” (Proust 51). The cookie for Proust stirs up memories of his childhood down to the specific image of the house in which he ate the madeleines, in the same way that the tree star for Littlefoot arouses his mother’s memory. Whereas Proust’s memories are aroused by taste, Littlefoot’s are aroused by mere sight of the food. The leaf is no longer only a food source to Littlefoot. It has become instead the closest tangible thing he has to his mother and a physical connection to a memory, a stand-in object for a person he cherished.