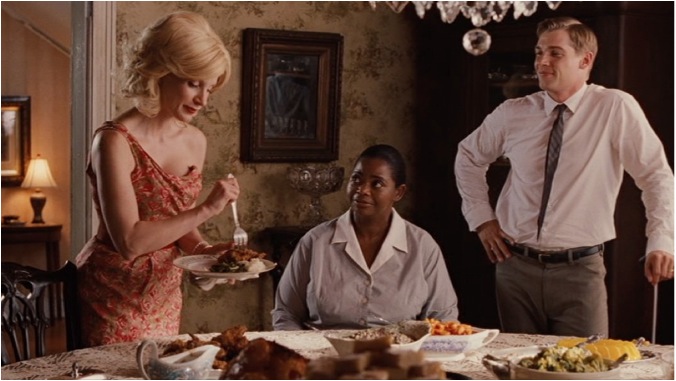 Minny teaches Celia how to cook fried chicken, equipping her with the skills to fulfill her wifely duties and even supersede her role as a wife. In return, Celia teaches Minny lessons in trust and patience, and empowers her to leave her husband. Throughout The Help, fried chicken is the bridge that empowers an individual to move beyond one’s failings and realize her potential.  ​

Celia Foote suffers guilt and feelings of inadequacy because she is unable to perform the tasks expected of a southern white woman in the 1960s: she has trouble conceiving a child, is an outcast from the societies and ladies charities of her community, and is a failure in the kitchen. She concocts a plan and hires a cook, Minny, to conceal her culinary shortcomings from her husband.

Minny’s first lesson to Celia is how to cook fried chicken. This is the first timeat her workplace that Minny has the freedom to choose what dish to cook. She regards fried chicken with an almost sacred importance, highlighted by her philosophy that “Frying chicken just tend to make you feel better about life”. For Minny the action of “frying chicken” is even greater than the consumption of it. The step-by-step cooking process that Minny teaches Celia begins their mutually beneficial relationship. The process itself is a combined effort: Celia has the working-class chutzpah and know-how to kill the chicken, a necessary action towards the final dish. Minny possesses the technical skill to complete the dish.

The cooking process shifts traditional notions of hire and help interactions. Minny, the maid, is in a position of power, giving orders to Celia. Celia, the “trophy” wife, is actually a hardworking woman with a humble background who can kill a chicken while a shaken Minny looks on. The reversal evident in the cooking process culminates in the shared meal between Celia and Minny. The table is an even plane between them, a metaphor that Minny and Celia are on the same level. The two characters take equal pleasure in the same meal, despite the reality that one wears an apron and the other, heels.

Fried chicken consecrates every space in which it appears as a place of safety and comfort. Skeeter and Abilene hold clandestine meetings in Abilene’s home to discuss the novel. The first meeting is characterized by awkwardness since neither Skeeter nor Abilene know how to act apart from the master-help roles. Skeeter sits in a dimly-lit and hardly-used living room, and is served tea and cookies on a tray by a timid Abilene. As their intimacy grows, their meetings shift to the kitchen, the heart of Abilene’s home. The two characters sit opposite one another, and equi-distant from both characters, directly in the center of the table, sits fried chicken on a plate. Fried chicken serves an intermediary between the two worlds, a food that both characters can appreciate. This generous host-gift shows Abilene’s willingness to let Skeeter into her world; to let Skeeter eat her food, made in her kitchen, by her hands, a dish chosen of her own volition.

The only settings where fried chicken is present are in Minny and Abilene’s homes and in Celia’s. That Minny would bring a dish so important to her into Celia’s hoe, indicates the level of tenderness she has for her friend. Minny is known in the community as the best cook and she offer the best gift she has, a taste of her own home cooking, to Celia. This intimate and telling gesture by Minny reveals a genuine desire to bring the familiarity of her own home, into another’s; a marriage of two menus.

While the fried chicken is a gift in it of itself, it is also the more important gift of independence. By first demonstrating how to cook the fried chicken, then stepping back and allowing Celia to do it on her own, Minny empowers Celia to acquire a skill she can be proud of. This independence taught in cooking carries over to other aspects of Celia’s life- she no longer begs to join prejudiced societies or fears her husband will leave her. She fills Minny a plate of food that she cooked, her proud husband looking on, serving Minnie with the tender compassion of a mother and the love of a friend.

Likewise, Celia’s feast for Minny is the emotional sustenance that inspires Minny’s act of independence: In a voice-over the narrator says, “That table of food gave Minny the strength she needed. She took her babies out from under Leroy and never went back”. The gentle nourishing and tough-love advice which Celia showers on Minny inspires Minny to take the same care of herself and her children and remove them from a hostile environment. Fried chicken is an extension of Minny’s heart and home that she shares with Celia, and in return Celia’s fried chicken inspires Minny to “take heart”, having the courage to reestablish independence in her home.