Can You Stomach It? The Sensual Thrill of Food in Tampopo (1985) 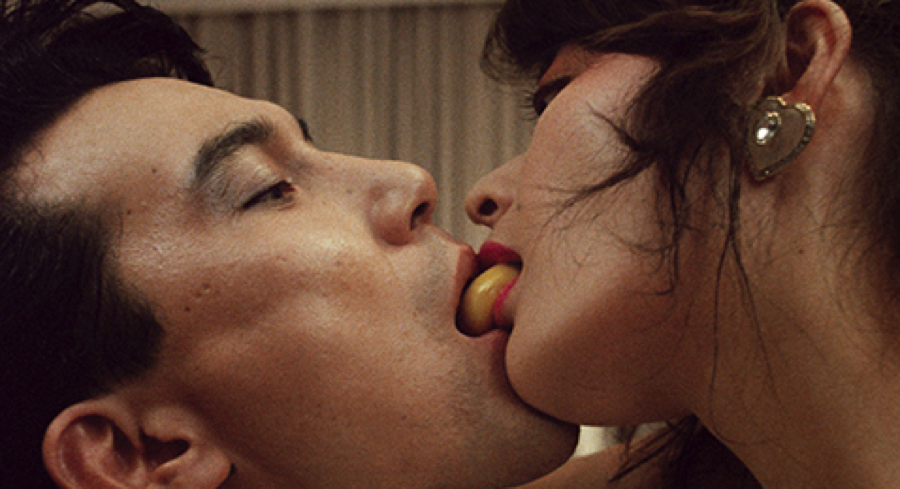 A gangster and his lover find egg-citement through their creative takes on foods.

Is food something to feed our bodies or to feed our senses? Tampopo (1985) demonstrates that food can provide more than gustatory pleasure. Through the incorporation of food into love scenes, bodily and sexual appetite are conflated. The use of food provides both a form of unconventional visual eroticism and a vehicle for expressing the unspoken emotions and desires of the parties involved.

The tie of food to sexual excitement begins in the introductory scene, as the woman in white bites and licks at her glove as a feast is laid before her, providing her own inedible aperitif. While she does not actually ingest it, the glove nonetheless is an oral stimulation just as conventional food is. The linkage of food to sex, both of which humans are said to have an “appetite” for, is present in several scenarios throughout the film. The most prominent example is the sex scene in the hotel, during which the gangster and his lover engage with various foods. They also, later, have a passionate exchange of an egg yolk between their mouths. The shot is close, with the two characters heads filling the frame. They lean back and forth, allowing the egg to slip from one mouth to the other. The woman’s amplified sighs and gasps during this scene make the sexual connotations of the scene clear. The slippery texture of the egg yolk is suggestive without journeying to explicit imagery. The scene concludes with her closing her mouth and making sounds as if she is choking, the egg yolk then dripping from her mouth, clearly signifying the finish of their bodily encounter.

Another scene during which food serves to convey desire features the gangster purchasing an oyster from a diver. The camera’s close-up of the girl cracking the oyster open paired with the rising volume of music suggests the significance of the oyster beyond a food item. The deliberate process of extracting the oyster from its shell, as she pulls apart the strands of flesh clinging to its sides, reflect how its opening is sensual and momentous, like the blossoming of desire between them. When the gangster cuts his lip trying to suck the oyster from the shell, the girl cuts it out and proffers it to him in her hand. While attempting to eat it,  he leaves a spot of blood on its surface, a stain upon its surface, suggestive of the coming loss of the girl’s innocence. He finally manages to ingest it, with a look of pure pleasure, which seems to awaken something within the girl. She puts her hand to his face and leans in to lick the remaining blood from his lip, her tongue and the thin lines of saliva linking them focused on in the shot. The opening of the oyster can be seen as the blossoming of sexual desire within the girl, and the sensual manner in which he eats it is a step towards conventional intimacy.

The appeal of a meal lies not only in swallowing but in the pleasure of the other senses as well, and the absence of these sensual pleasures would render what we usually consider food unrecognizable. The intertwining of lovemaking and food within Tampopo show that our hungers for both are not always distinct and, in fact, may often merge to create new forms of intimacy.