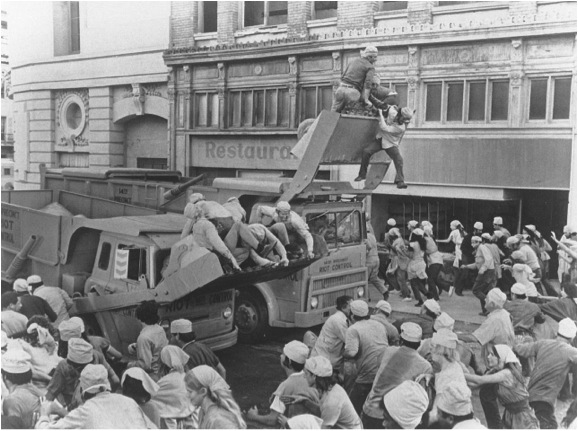 Riot Control trucks push their way through the crowds after an uprising over food shortages.

Soylent and Subjugation: Food as a Means of Control

Few movies are as deserving of the moniker “cult classic” as Soylent Green. Richard Fleischer uses a dark vision of futuristic New York to depict the power of food, importance of environmental preservation, and the dangers of rampant capitalism. Unlike many of its dystopian peers, its primary symbolic elements are related to food. Central to the story is how the Soylent Corporation is able to use its control of the food supply to gain global influence. In particular, Soylent Green explores the reasons for which food is an ideal means for control and well as the dimensions of power that such control enables.

Initially, one must wonder why it is that food has become the primary ammunition in the war of capitalist companies against the oppressed populace. In most dystopian novels, dominance is achieved through military might, mind control, or a combination of both. However, though the police play a central role in Soylent Green, the Soylent Corporation has no Palace of Corrective Detention, telescreens, thought police, or command economy. Instead, most members of the populace go about their lives with little interaction with the corporations, interacting with the governing bodies only to get their food rations. This unique take on dystopia is undergirded by the idea that food control alone is enough to produce cultural subjugation. The film’s imagery underscores why it is that food is an ideal mechanism through which such control can be achieved. The emaciated bodies of children and the rabid hunger of the populace on Tuesdays (“Soylent Green Day”) serves to remind the viewer of how dependent humanity is on our meals. Few people in the overfed West are forced to confront their need for food as sustenance, and the film’s depiction of a starving New York contrasts sharply with the relatively well-fed New York of today. However, it requires little imagination to envision how this basic need for nutrition could quickly overpower most other pursuits were food to become scarce. It is this very essentiality of the human need for food that allows the Soylent Corporation to so easily control the world’s population.

However, though their power over the food supply is important, the Soylent’s political dominance is only possible because the population is removed from the means of their food’s production. The Corporation’s complete social control rests on a delicate balance between circumstances being “bad enough” that their food is an absolute necessity, while still being “good enough” that mass revolt is unlikely. The movie explores the fact food scarcity alone is not enough to drive political revolution. In fact, Soylent depends on such scarcity to maintain power. Though during the movie, Soylent is forced to quell a small revolt when the supply of Soylent Green runs dry, the problem is short term and could be solved via a slight increase in production of the good. In terms of its potential impact on the New York populace, this minor supply problem is dwarfed by the problem of the actual content of the titular green bars. The main character seems to believe that the knowledge that “Soylent Green is people” will be enough to rouse the citizenry into action, and the movie’s ending (a group of people literally being roused from sleep) strongly implies that he is right. Thus, the separation of the people from their food’s production is the main barrier to revolution.

This theme of separation should come as no surprise, given that society in the West has become increasingly distant from the actual production of what we are consuming. The movie represents the most abhorrent and extreme result of such separation: not only do the people have no idea what is actually in the Soylent bars, but this lack of knowledge results in unintentional cannibalism. Moreover, Soylent Green tangibly represents this separation from food via images of opaque food trucks, highly processed green bars, and especially through the literal barrier between the people and the Soylent factories themselves.

Interestingly, though the necessity of food and the people’s separation from its production does give the Soylent Corporation considerable power, the extent of their control is comparatively limited. Many stories of dystopia depict the governing bodies as having absolute power over the minutia of the lives of their citizenry. For example, in 1984, ‘Big Brother’ is said to control the very thoughts of the people in Oceania (Orwell 1949). In A Brave New World, the government’s power extends even to the mating behaviors of their populace (Huxley 1969). Contrastingly, the Soylent Corporation’s authority is primarily economic, though their wealth does afford them a large amount of political power.

Unlike many dystopian stories in which the primary antagonist is the government, in Soylent Green the main character fights against a private corporation. Soylent does not have any influence over the people’s home lives (like the government in 1984), nor does it appear that they are the ones deciding on people’s careers or choice of spouse (Orwell 1984). Instead, they control “two thirds of the world’s food supply” and use their money to remain in the good graces of the much weaker government (which is apparently distinct from the corporation itself). Thus, their power appears to be mostly economic and they seem to have little interest in the day-to-day affairs of the populace. Worth noting, however, is the extent to which this economic control allows them power in other areas. For example, their wealth allows them sexual control over a group of women (whom they refer to as furniture), who are treated as little more than property. These women rely on the wealthy businessmen for food and shelter in exchange for their freedom. Soylent Green is a clear picture of the importance of food as a means of social control and the enormous power that is available to those who can control the food supply. It should serve as a warning to carefully monitor what we are consuming and the people who control the means of our food’s production.