The Parody of Feast in Monty Python and the Holy Grail 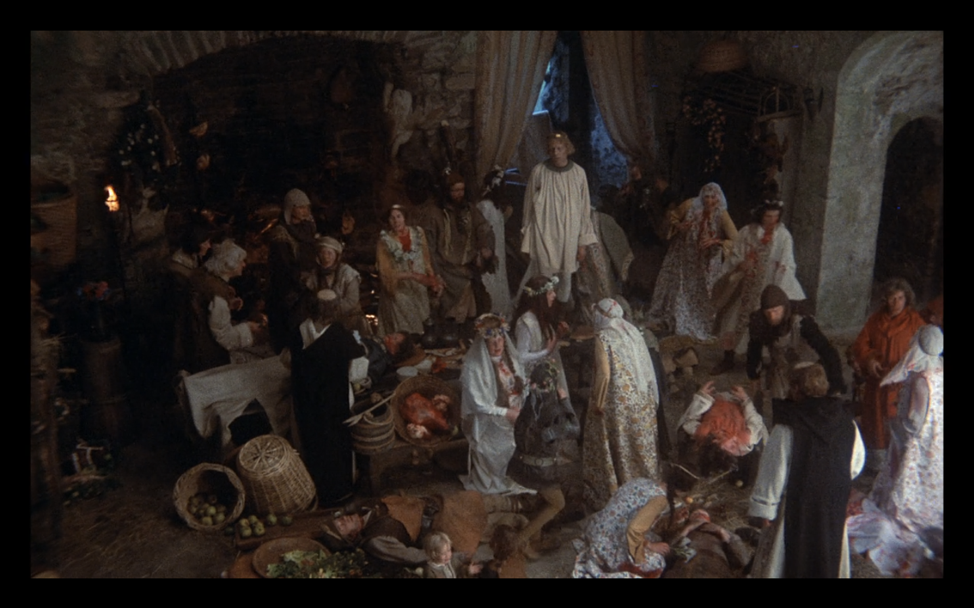 Monty Python and the Holy Grail playfully retells the Arthurian legend of the search for the Holy Grail. Through humor, social commentary, and extensive breaking of the fourth wall, this mock-heroic film satirizes many different aspects of both the medieval and modern world. The feast has been a central component of society and culture throughout history, so it should come as no surprise that the Pythons parody the feast in its various incarnations and perversions, ranging from the feast of excess and absurdity to the wedding feast and from the feast of transgression to the religious feast.

At the beginning of Monty Python and the Holy Grail, King Arthur sets about gathering a band of knights for his court. An early scene in the film opens with Arthur and his company travelling along the road to Camelot as Sir Bedevere, the new man of science, explains, “And that, my liege, is how we know the earth to be banana-shaped” (0:22:00). Immediately after this food-related joke, the castle of Camelot comes into view and Arthur dramatically invites the knights to ride with him there. The scene immediately switches to the chaotic interior of the castle as the Knights of Camelot cavort amidst frantic animals and overworked servants and perform a silly sing-and-dance number atop the tables in a long line (see Figure 1). Upon the conclusion of their song, the scene abruptly switches back to Arthur and his companions as the king says, “On second thought, let’s not go to Camelot. It is a silly place” (0:23:40). Through its absurd portrayal of the carousing knights at Camelot, this scene provides a strikingly apt and comical example of a feast of intemperance along with all the excesses of behavior that accompany this type of feast. The knights of Camelot absentmindedly hit servants bearing trays of food, knock over platters and pitchers, and dance in a cluttered, dimly-lit environment with poultry underfoot (0:22:30-0:23:45). Their “silly,” wasteful antics and single-minded focus on the pleasure of “din[ing] well” characterize the transgressions of an abundant feast gone wrong (0:22:40, 0:23:40). 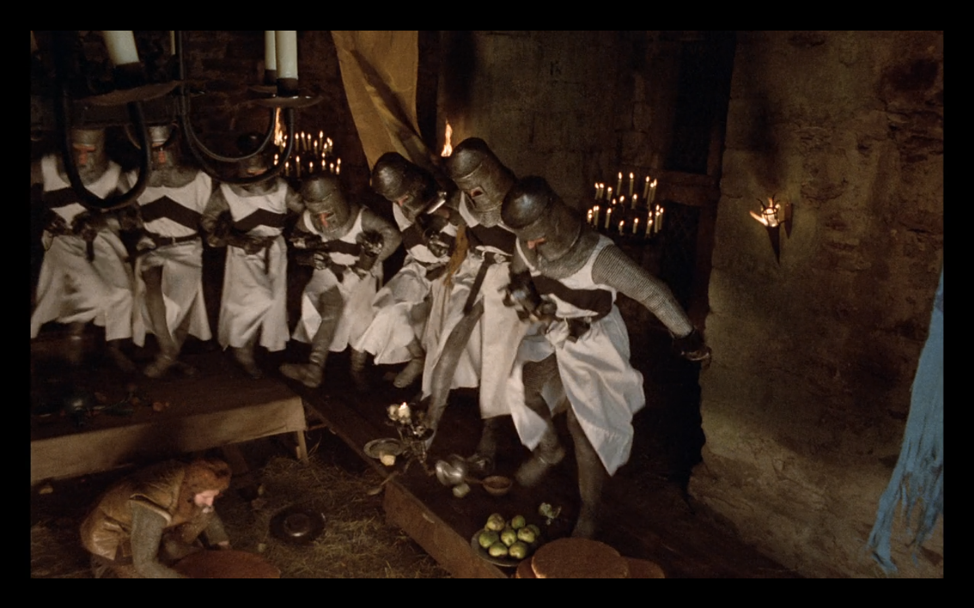 Monty Python and the Holy Grail also spoofs traditional conceptions of family, profit, and the wedding feast when the overeager Sir Lancelot answers a distress message from a distraught prince who refuses to submit to an arranged marriage (0:47:30-1:00:30). The camera pans over an extended depiction of the preparations for the feast, the celebrating guests, and the merry wedding band, all bedecked with flowers (0:53:45-0:54:40). Then the scene abruptly devolves into over-the-top violence as Lancelot rushes into the midst of the wedding celebrations, hacking away indiscriminatingly at the guards, wedding guests, entertainers, and even a torch hanging on the wall (0:55:00-0:56:00). This episode ultimately culminates in a musical number sung by the surviving guests and the groom as the avaricious father futilely attempts to bring the situation back under control (see Figure 2). This juxtaposition of celebration and murder, with copious amounts of fake blood splattered over the clothes of the actors and food spilling on the ground, brings to mind a grotesque Bakhtinian carnival and subverts the traditional imagery of a joyful wedding feast.

The Pythons comment on yet another perversion of the feast when King Arthur and his retinue brave the icy land of Nador. This short section of the film is a medieval-style cartoon that depicts the travelers wandering through various lands in search of the Holy Grail. As the narrator informs the audience, Arthur and the rest of the knights run out of food and are “forced to eat Robin’s minstrels” (1:05:05). The minstrels’ deaths occasion “much rejoicing” from Arthur and his retinue, who seem to justify their cannibalism not only because they have no food but also because the minstrels have annoyed them in their previous adventures (1:05:05). The narration and cartoonish style of this scene exaggerate the humorous aspect of the cannibalism (see Figure 3). Because the minstrels are yanked behind a rock as the narrator explains that they were eaten, the viewers do not actually see what happens to them firsthand. This visual choice distances the audience from the transgression of cannibalism and thereby prevents the scene from becoming too grotesque and shocking. Moreover, as one analysis of Monty Python and the Holy Grail points out, the cannibalism of the minstrels brings to mind the chocolate candy called Galaxy Minstrels (“Film”). This potential paronomastic allusion not only increases the humor of this scene by equating the act of consuming humans to that of eating chocolate, but also highlights the fact that both acts have traditionally been viewed as transgressions. The Python’s brief but amusing exploration of the taboo topic of cannibalism enables them to play with traditional notions about food, transgression, justification, and reprehension. 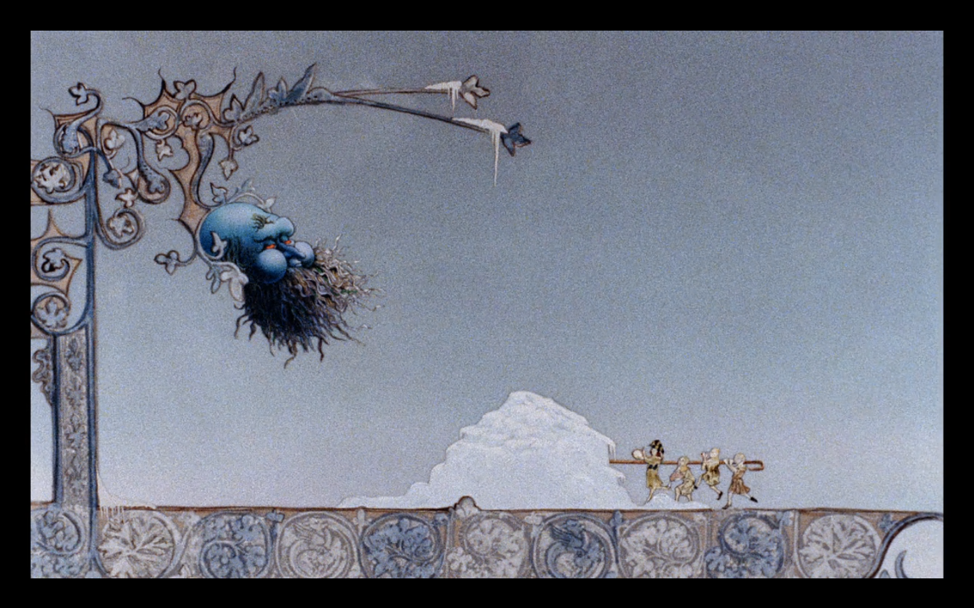 The Pythons’ humorous treatment of the feast also extends to the religious, ritualistic feast, as shown when Arthur and his knights face the seemingly undefeatable Killer Rabbit of Caerbannog. In a flash of inspiration, Sir Lancelot suggests that they use the ancient religious relic known as the Holy Hand Grenade of Antioch to defeat their foe. The clerics accompanying the knights bring out the Holy Hand Grenade in a spoof of a Christian high mass, complete with incense and chanted Latin, and instruct the knights on how to use the relic by reading from the fictitious Book of Armaments (see Figure 4). After describing a previous use of the Hand Grenade in which a saint praises God for blowing “Thine enemies to tiny bits in Thy mercy,” the pseudo-scriptural text describes the triumphant feasting of the victorious people. Humorously, the items of the victory feast listed in the Book of Armaments consist entirely of ludicrous, incongruous food items: “And the Lord did grin, and the people did feast upon the lambs and sloths and carp and anchovies and orangutans and breakfast cereals and fruit bats and large chu—” At this point in his declamation, the reader is interrupted by a second cleric who, somewhat impatiently, tells him to “skip a bit,” and he does so (1:05:30-1:18:00). Through its exaggerated religious ritual, this scene takes on aspects of the Feast of Fools, a medieval custom that temporarily inverted normal social convention and hosted burlesque masses (Bakhtin 74-75). Additionally, the nonsensical list of foods eaten by God’s chosen people in the Book of Armaments pokes fun at traditional religious texts and calls into question what is truly sacred. In Monty Python and the Holy Grail, the Pythons invite us to laugh with them as they poke fun at everyone and everything, including themselves. Their undiscriminating parody uncovers and dialogues with various perceptions and embodiments of the feast, ranging from excess to celebration to transgression to ritual. As a result, the film offers a humorously insightful commentary on the nature of human society and the world, prompting us in turn to reconsider our own notions of food, community, and the feast.