Yoshihiro Nakamura’s Miracle Apples is a Japanese film set in the countryside village of Tsugaru, Aomori Prefecture. The farmers of Tsugaru are unlike other Japanese farmers; where many farmers give up on cultivating apples due to their difficulty, Tsugaru triumphs, boosting apples to its primary product partly through the use of a powerful pesticide. The film focuses on one farmer, Mikami Akinori, who inherits four apple orchards and labors tirelessly to support his family. But when Kimura Mieko, his childhood love and wife, develops a painful allergy to the pesticides used to prevent infestations and disease, Akinori is determined to find a harmless alternative. Through the struggle that Akinori experiences, and the integrity he refuses to compromise, the reward of organic apples triumph over the non-organic apples in taste and quality.

The importance of apples is clear as early as the opening credits. This fruit is a symbol for the strength and determination of the farmers of Tsugaru, and distinguishes them from other villages who failed at apple farming. Yet assimilation into the farming co-op’s usage of pesticides results in a life-threatening allergic reaction from Kimura Mieko, causing Akinori to be conflicted: should he conform to the community’s near-obsessive usage of pesticides, or attempt an alternative? Akinori chooses the alternative path; he has determined that the health of his wife is more valuable than the easy path pesticides provides. By Akinori declaring himself apart from the farming co-op, he has unknowingly ostracized himself from the others, operating outside of the standards of social conventions. 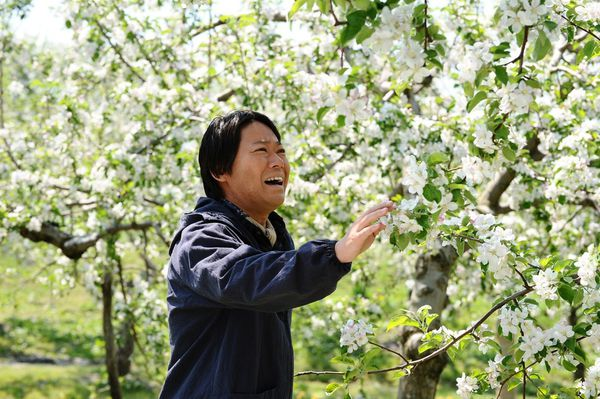 Mikami Akinori rejoices upon seeing the first bloom of his organic apple orchard.

In one particularly symbolic scene, Mieko tells Akinori, “You’re like the sun, always lighting the way for all of us. From here on, I hope you’ll always be lighting the path for us.” At the forefront of the organic movement, Akinori makes himself vulnerable to criticism and mockery, as all his initial efforts end in failure. All possible leads have been exhausted, causing the family funds to dwindle and forcing Akinori and his children into poverty and social isolation. But he remains determined, his resolve unshaken until the climatic scene. On the breakthrough, Akinori realizes that true success comes the absence of needless effort; he ceases weeding and sows soybeans instead, allowing the leaves to fall to the ground and naturally fertilize the soil. Apples reveal the pride involved in trying too hard to improve upon nature.

On the 11th year, Akinori is successful – his remaining two orchards bloom, a sign of fruitful harvests. The opinions of their fellow villagers begin to change. Where he was previously mocked, deprived of help, ignored, and physically assaulted, his tenacity is now lauded. Akinori’s apples prove to be more flavorful and popular, appealing to the health-conscious lifestyle of Japanese citizens. The success of his apple orchard provides the satisfying resolution of the film as Akinori finally celebrates amongst his family, strained relations long forgotten. Apples represent more than livelihood to the villagers of Tsugaru; apples symbolize social status, familial relationships, and the tenacity of the one man’s spirit.