Mystical and Disciplinary Food in Matilda

Figure 1. Matilda enjoys a pie that landed on her plate after a series of unfortunate events happen to her family.

From the first scene of Matilda, it is clear food plays an integral role. Self-sufficient Matilda trashes the Campbell’s soup can her wicked mother leaves on the stove and opts to make pancakes from scratch while the narrator explains that young Matilda “knew whatever she needed in this world, she’d have to get herself.” Her neglectful and sedentary family spends family time eating junk off TV trays in the dark, stuffing their faces with fiddle faddle popcorn, peanuts and cheese balls and guzzling Bud Light, Budweiser and soda. The nutritional value of the food matches their value as members of society; Mr. Wormwood cons people into buying faulty cars, Michael follows his father’s path, and Mrs. Wormwood spends her days playing bingo and applying lipstick. In the modern fairytale, food takes on a mystical quality, exposing the magical powers that work on Matilda’s behalf to help her overcome tyrannical adults, and also wields the power of the same cruel adults over children.

When Mrs. Wormwood wins big in bingo, she takes the family to “Cafe the Ritz” to celebrate. Here, the mystical forces manifest in food first come into play. Throughout the film, Matilda’s magical powers appear through food in a sort of triumph of good over evil. At the “Ritz,” Mr. and Mrs. Wormwood make a scene as Mrs. Wormwood pries off Mr. Wormwoods hat, which Matilda glued to his head. Mrs. Wormwood topples backward over a table, and Mr. faceplants into a table of pies, launching them into the air. Nondiegetic swooshes, zings and zoinks correspond to the movement of the flying food. An extremely low-angle shot shows the pies soar across the restaurant, with one tart and a fork landing neatly in front of Matilda. Immediately after, a pie splatters in Michael’s face with a splat, making Matilda the only family member to make it out unscathed. Sporadic and short shots achieve the disorder of the event.  The chaotic scene ends with Matilda scooping a bit of whipped cream from her pie and grinning in satisfaction. Her triumphant smirk stems from the creamy goodness of the treat and her awareness of the favor bestowed upon her by magical forces. 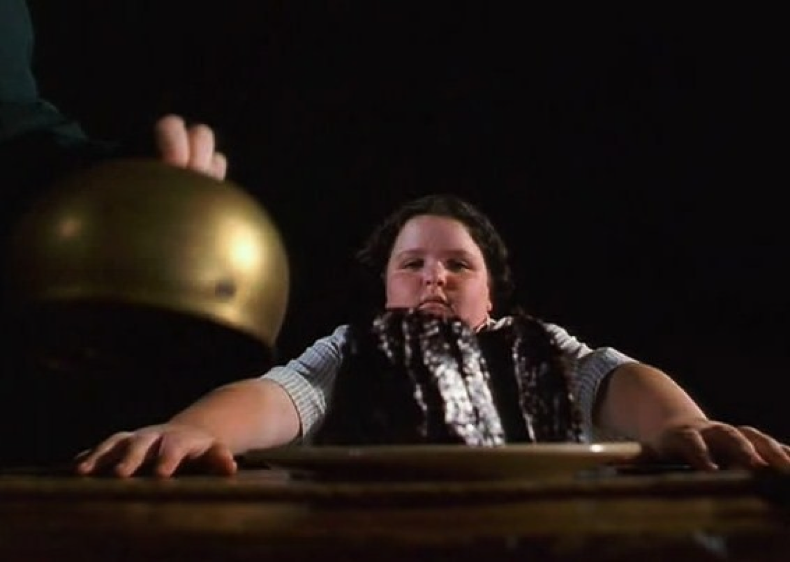 Figure 2. Trunchbull removes the lid to the chocolate cake that she force feeds Bruce Bogtrotter.

Chocolate enforces adults’ overbearing rules when Trunchbull punishes Bruce Bogtrotter for stealing her chocolate cake by force feeding him an excessive amount of the same cake in front of all the students. A low-angle shot establishes Trunchbull’s authority over Bogtrotter as she reprimands his behavior. As the two characters speak, the low-angle shot alternates with an extreme close-up of Trunchbull’s face, which adds to her characterization as an unfair, repugnant principal. Next, the camera occupies an even lower angle, below the table on which the cake lies, which puts the cake container in a position decapitates Bogtrotter. His arms extend from either side of the container with fingers spread on the table, evoking a sense of torture. Then, the camera tracks Trunchbull’s hands as she prepares the cake for Bogtrotter, focusing on the knife thereby elevating the scene to a greater sense of danger. Trunchbull plops the cake into Bogtrotter’s hand, and he finishes the piece with some level of enjoyment only to be forced to consume two larger pieces. The shot zooms into an extreme close up of his chocolate-covered mouth before fading into the next scene.

Throughout the rest of the film, Matilda’s interactions with food reveal her triumph over the callous adults in her life. She practices her magical powers by moving cheerios with her mind and proves her mystical abilities to Miss Honey by levitating a pitcher of water. Benevolent Miss Honey offers an escape to Matilda with tea and cookies and eventually adopts her. The film ends with the two sharing an idyllic picnic of Granny Smith apples with peanut butter and jellies, suggesting a happier future for Matilda.