The Diner for Lonely Souls

Kamome Diner is set in Helsinki, Finland and follows the story of a Japanese woman named Sachie who is struggling to attract customers to her diner. The story also focuses on the interesting friends she meets along the way. Sachie appears to be doing everything right with her diner in the beginning scenes. After the establishing shot, Sachie is seen wiping a glass cup while leaning against a counter. She is clothed in a colorful outfit. Her diner is illuminated by the light coming in through the windows; the walls are white with a blue trim, giving it a calming effect. A vase of white flowers stands next to her on the side. This image gives the impression that Sachie’s diner is a welcoming place, but the lack of customers present suggests otherwise.

The problem with Sachie’s diner is not that it does not attract people, but that it seems to only attract certain types of people. Sachie’s first customer is a local boy name Tommi. At first he seems to be normal. He orders coffee and speaks in Japanese to Sachie. As the film progresses however, you almost always see him sitting alone at a table. He never brings a friend with him to the diner and when asked about his friends, he does not reply. Midori and Masako are Japanese as well, and there are similarities in their reasons for ending up in Finland. Midori wanted to go somewhere far away, so she took a chance and ended up there. Masako had to care for her ill parents until they died. While she was taking care of them, she saw Finland on the news and thought the people there were carefree, something she longed for at the time. Matti and Liisa both have problems with their families. Liisa’s husband left her one day and Matti has not seen his wife and child in a while. 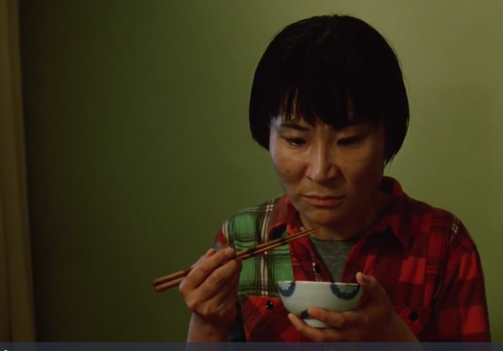 Midori after taking a bite of Japanese food

Although these people come from different backgrounds, even different countries, they all share common themes: loneliness, nostalgia, and a need for purpose. Loneliness was the motive driving them all to the diner because it was a comfortable and relaxing place. Nostalgia is shown throughout the film in different ways. One in which Midori takes a bite of the Japanese food that Sachie makes for her. She cries after taking one bite. The scene is dimly lit and we have a medium close up of Midori as she eats a bit of rice. Immediately afterwards she starts to cry. We can assume she experienced homesickness after tasting the food. Another instance of nostalgia is when Matti comes back to the diner to steal his old coffee machine. He longs for a time when things were better in his life and that machine represented it. A need for purpose is shown through both Masako and Midori because they ask to help out in the diner with Sachie. They are both far away from home, but cannot simply be labeled as tourists. They are wanderers looking for something to give their lives meaning. They are empty and wish to have some sort of fulfillment, and they find this with Sachie at the diner.

Sachie heals her friends through food and conversation. There are many scenes with Sachie sitting down with people or a person with a cup of coffee and a smile. She welcomes them with open arms and allows them to vent their troubles to her. In a way she is almost like a mother to them. Sachie also provides them with food. Her favorite comfort food is onigiri, which she claims is “Japanese soul food”. She makes this dish for her friends in various scenes in the film. In two particular scenes, the purpose behind the onigiri is emphasized. In one scene, Masako orders onigiri after she returns from the forest. When she picks it up, the camera changes to a medium close up of Masako then changes view so that we can see that all of the people in the diner are staring at her. The chattering stops and it is dead silent. All that is heard next is the sound of a crunch as Masako takes a bite of the rice and seaweed, and as if a spell was broken, the chattering begins and everything goes back to normal. Another scene in which onigiri is used is when Sachie and her friends are sitting around a table eating it together. It was therapeutic in a way. Each person at the table had gone through some type of suffering and are in the process of healing. They are united and comforted by this fact.

“A sad person is sad in any country”, Masako tells this to Sachie after they comfort Liisa. This is the harsh reality of Sachie and her friends who are all in some way trying to escape their problems. Sachie herself has a tragic past, but admits she found joy in seeing animals eat. This joy transfers into her adult life by attaining the same joy in seeing her customers eat her food. Sachie unknowingly attracts lonely souls to her diner because she has a healing effect on them. She comforts those who come to her with a warm cup of coffee and her signature meal: onigiri, the Japanese soul food.