Overall this film exemplified how food can bring joy, community, and represent the people that consume it. Good Burger, directed by Dan Schneider, is a comedic film about two co-workers strengthening their friendship through trying to save their beloved fast food restaurant “Good Burger”.

The main character Dexter, is a teenager who needs money to pay for damages he caused when he crashed his mother’s car. Dexter applies for a job at a massive food restaurant entitled Mondo Burger. Dexter’s personality clashes with Kurt, the manager of Mondo Burger, and he gets fired. After Dexter is fired, he goes across the street to Good Burger and orders milkshakes to combat his depression.  While at Good Burger, Dexter meets Ed, who is a goofy, simple minded cashier who is passionate in his work.  Ed ends up getting Dexter a job at Good Burger. Mondo Burger officially opened the next day, and the size of the individual patty was twice as large as the Good Burger patty. Mondo Burger starts to bring in more customers away from Good Burger foreshadowing their restaurant going out of business.  One day, Dexter discovers that Ed makes his own sauce that was amazing. Dexter told Ed to put the sauce on the burgers to gain their customers back.  As the customers start to come back, Dexter makes Ed sign a contract that allowed him to receive 80% of Ed’s profit from the sauce. After the sauce was implemented, Good Burger started to regain its popularity.

The manager of Mondo Burger attempts to replicate Ed’s Sauce however he fails.  He then tries to bribe Ed to give him the recipe, however Ed was so loyal to Good Burger that he does not confess. One day Dexter and Ed analyze a Mondo Burger and try to figure out why they are so large. They sneak into Mondo Burger’s kitchen and find out that they have been adding illegal chemicals to the meat in order to make the patties bigger. After Dexter and Ed figure out their secret, the manager locks them away in a mental hospital. While they are locked away, the manager of Mondo Burger poisons Ed’s Sauce over night. Right before Good Burger Opens, Dexter and Ed escape the mental prison just in time to dispose of the poisoned Ed sauce, and pour all of the illegal chemicals into Mondo Burger’s meat grinder, causing the burgers to get so large that the restaurant explodes.  In the end, Dexter receives his money, the Mondo Burger manager goes to jail, and Ed is no longer considered as the goofball but a hero. 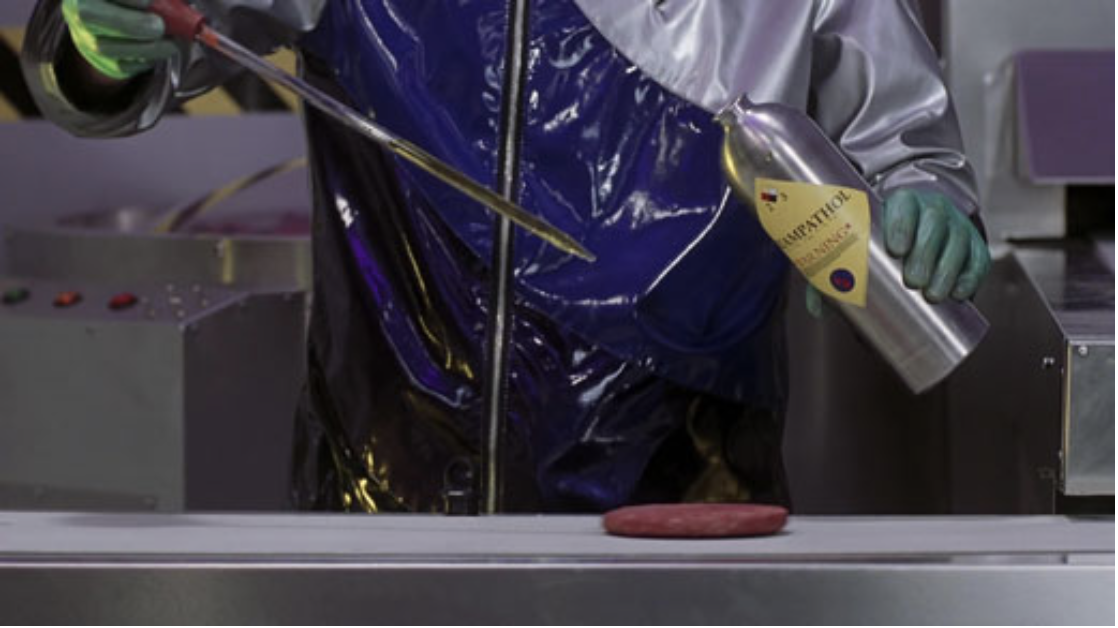 This is a still of the illegal chemical being placed on the patty.

Food in this film, especially the “Good Burger”, is used to bring aspects of joy, belonging and community.  It is ironic how Good Burger brought Ed and Dexter together because Ed indirectly caused Dexters accident. While Ed was making a delivery on roller skates, he darted across Dexter while he was driving and caused him to swerve and crash his mother’s car. Ed’s passion in the fast food restaurant is an example of how food can ignite joy. Ed was so passionate in the Good Burger restaurant because he genuinely enjoyed the burgers and serving people. Ed was so passionate that he was never in a scene without this uniform and hat. Although money was an incentive for Dexter, Good Burger gave Dexter not only friends for life, but a new outlook and motive in life.

I think the food within this film represented the people. The patties and other ingredients within the good burger were authentic reflecting the genuine and authentic personalities of the workers. Mondo Burger on the other hand used illegal ingredients to make their burgers bigger and taste better. The manager of Mondo Burger reflected the grimey, and fake ingredients placed into their burgers because he was all about the profit of the company and not the health and satisfaction of his customers in general.

Dexter within this film is a dynamic character because he initially is shallow and only cares about profit when he starts out at Mondo Burger, but as he starts to work at Good Burger, his actions start to reflect the authenticity and genuine care put into the good burgers. He starts to see this when he is profiting more money off of Ed, but he realizes how innocent and genuine Ed is and discovers that integrity and friendship is more important than his profit. Overall Good Burger showed how food can be used as a tool of synergy, happiness, and a reflection of others.