Is Coffee a Social Lubricant? 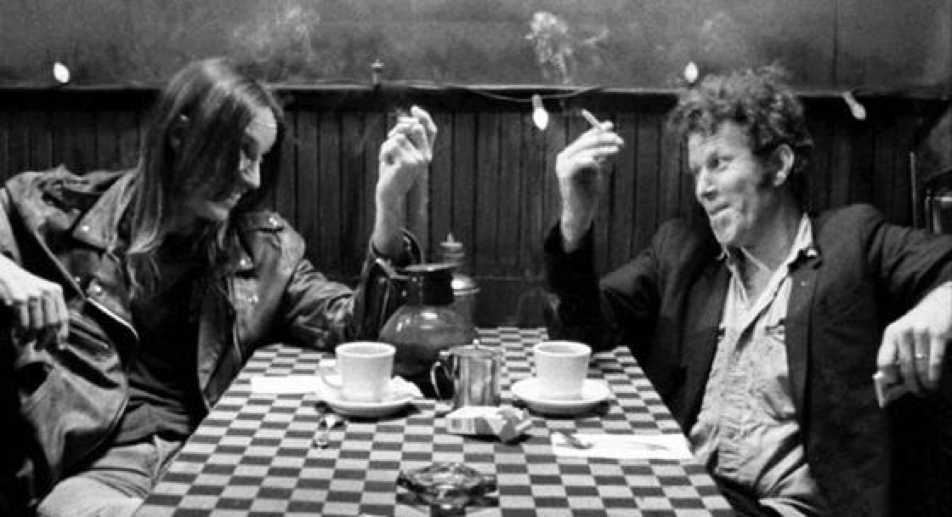 Right before Iggy Pop and Tom Waits light up their cigarettes, Tom says, “Now that I’ve quit, I can have one, ‘cause I’ve quit.”

Released in 2003, Coffee and Cigarettes is a series of 11 vignettes that follow conversations between two or three people. Each conversation is in a restaurant where the characters, over cigarettes or tea and coffee, argue or discuss various obscure topics. However, there are themes that connect each vignette, including conversation about why cigarettes and coffee are bad for you and how you should drink more than coffee for lunch, celebrity worship, and Nikola Tesla’s belief that Earth is a conductor of acoustical resonance. Jim Jarmusch uses coffee or tea and cigarettes to depict how, even though they are a social lubricant, the two only help facilitate surface level conversation, many times creating awkwardness due to the lack of common ground.

A film that simply follows people’s everyday conversations over coffee and cigarettes seems quite boring, however there are fascinating themes, bizarre and funny conversations, and interesting commentary on food in a social setting. Because there are so many vignettes, I am going to analyze two and explain how they connect to the film as a whole. The first vignette is called “Cousins?,” featuring actors Alfred Molina and Steve Coogan. Alfred Molina is already seated at a table, offering Steve Coogan a cup of tea as he sits down. Even from the first scene, there is apparent discomfort between the two as Mr. Molina nervously compliments Mr. Coogan’s jacket. The two then continue conversing about a variety of topics, and even when one slightly disagrees or challenges the other, they retreat to be sure no offense is taken. For example, Mr. Coogan explains why he isn’t very fond of Los Angeles, but after Mr. Molina explains his history with the city, he quiets down.

As the conversation progresses, the uncomfortable nature becomes more apparent. Oftentimes, Mr. Molina will compliment Mr. Coogan or ask a question, only to receive a blunt “Yeah” or “Thanks.” Then, the two each take a sip of their tea in silence. Similar conversation continues throughout the vignette, highlighting the surface level conversation. Mr. Coogan, more famous and popular, seems uninterested in the conversation, consistently acting like he is above Mr. Molina. This arrogance continues when Mr. Molina presents his heritage research, explaining how they are actually related. Mr. Coogan seems extremely disinterested, refusing to even give Mr. Molina his home telephone number to contact him later. Then, Mr. Molina receives a phone call with another notable celebrity, and now, Mr. Coogan is suddenly interested in his proposed friendship. This power complex intimidates Mr. Molina, keeping him quiet, and comments on celebrity status during that era. In regards to food, the tea is ordered before Mr. Coogan even arrives and have a brief conversation about tea generally, showing how people believe it relieves social awkwardness. However, throughout the rest of the vignette, the two never seem to break the ice, taking sips of their tea when there is prolonged silence.

Another scene that I found especially interesting is called “Somewhere in California” with Iggy Pop and Tom Waits. The two meet at a diner, and after Tom sits down, Iggy says “I ordered you some coffee.” There is a long moment of silence accompanied by a blank stare from Tom until he says “Yeah, sure, that’s cool.” The silence continues as they each take a sip of their coffee. This first scene, again, shows how, while people can bond over coffee, this still doesn’t break the ice. Jarmusch does a fantastic job of making the viewer feel this discomfort between the two characters.

They then begin talking about cigarettes because of the pack sitting on the table. Tom asks Iggy if they are his cigarettes on the table, and Iggy replies that they were just sitting on the table. Then, the two both bond over the fact that they have “quit” when they clearly both still smoke. Tom even says, “Now that I’ve quit, I can have one, ‘cause I’ve quit.” It seems as if the two just talk about whatever is in front of them, tip-toeing around any potential conflict or judgement from the other person. Even though they both smoke, they immediately claim they have both quit, and they both end up lighting a cigarette together, pictured above. They go on to talk about how they are the “coffee and cigarettes generation” and continue similar conversations for the remainder of the vignette. Even though they have coffee and cigarettes, there is still an apparent discomfort between the two, and they never seem to have a genuine conversation. There are long silences accompanied by drags on their cigarettes or sips of their coffee. They avoid any conflict in the conversation, resolving any controversial statements they have made. Similar to the first vignette, they just never seem to move past surface level conversation.

In both vignettes I discussed and throughout the film, coffee doesn’t act as a social lubricant as the characters hope, rather it only provides another topic of conversation. As you would expect, the strangers that met for the first time over coffee didn’t really get to know much about each other. When I sit down with someone I have never met before, we don’t usually don’t have deep conversations. Instead, similar to the film, we talk about simple things that seem relevant to the both of us, avoiding any controversial topics.. However, there is a false belief that coffee, and cigarettes during this era, relieve the tension between people when they meet for the first time. However, Jarmusch takes a clear position on this topic, illustrating how coffee is nothing more than a conversation starter and doesn’t relieve the discomfort many people have when they first meet someone.